Popayán is small, picturesque town about 60 miles south of Cali. Guide books compared its architecture to that of Cartegena, but without cruise ship tourist herds. The later part is correct, there are hardly any tourists. The former perhaps not so much. Although it likes to call itself also white city, due to the color of the most of colonial houses and places in the city downtown, where several churches are located, the city is much smaller and provincial. There are many young people around, because of number of educational institutions, including the University of Cauca (est. 1827), one of Colombia’s oldest and most distinguished institutions of higher education.

We stayed at Dann Monasterio, a nice colonial era building and comfortable rooms, located close to the city center. We went for a walk in the afternoon and an excellent dinner to Camino Real.

The short flight to from Popayán to Cali was very pleasurable. We drove to the airport, pre-flighted the airplanes and than climbed to the control tower. Two very nice controllers were curious about our trip, what we thought about Colombia and Popayán, gave us flight plan form to fill and that was it. No operation office, no running around and waiting and most unexpected of all, nothing to pay.

In Cali, we were hosted by Aeroclub del Pacifico, we got parking spots under shades, which considering temperature close to 30 degrees, was quite important. We had a wonderful lunch with Monica, the owner of the local flight school and Cirrus representative for Colombia and with José, the only CSIP in the country. We also picked up some tips for flying into Ecuador from the local pilots. It was amazing to hear people flying from Cali to Oshkosh in all sorts of airplanes, including a Piper Cub.

Departure from Cali merits a separate post, which I will write later. Our destination for the day was Latucunga, Ecuador (SELT), an airport about 2 hours drive south of Quito. The landing fees at the main Quito airport (SEQM) are about $4,000, which explains our choice. 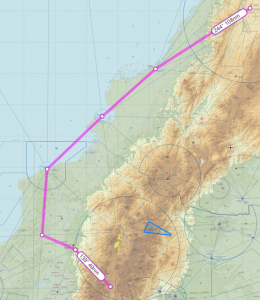 The straight route from Cali to Latacunga is 305 nm, via G675, however the MEAs are at FL180. Looking at Skew-T diagram it was obvious we would be in IMC and above freezing level, not a nice combination over the mountains. We instead opted to take longer route along the shore, via Tumaco and Esmeralda VORs, before heading East. Although longer (400 nm), that route allowed us to stay at 14,000 feet, below freezing level with balmy 6 degrees and also VMC for almost all the time. However, when close to AROTO, we had to climb to 16,000 for terrain and we got into clouds. The temperature was between 0 and +2 degree, so I primed and used TKS on low settings. Few miles before ORETA, we got switched to Quito approach and received vectors for the approach to Latacunga. One must admire the effort Ecuador put to provide radar coverage in between peaks of Andes, it was unexpected and very much welcomed. I had TAWS on the MFD and it was painting red in front of us even at 16,000. The zoom-in of the final segment shows why. 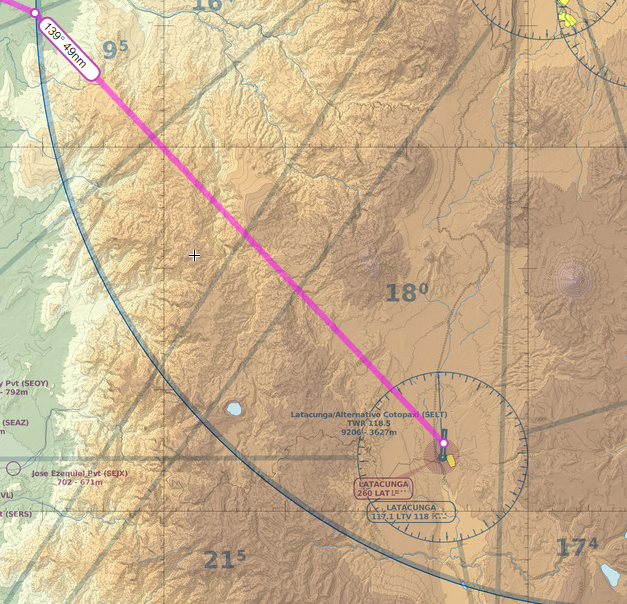 Notice the OROCA of 18,000 above our route and 21,500 below; the arrival was taking us over a valley between peaks and in IMC, it is somewhat unsettling.

The approach to SELT is also quite interesting, it is not often that the IAF is at 15,000. 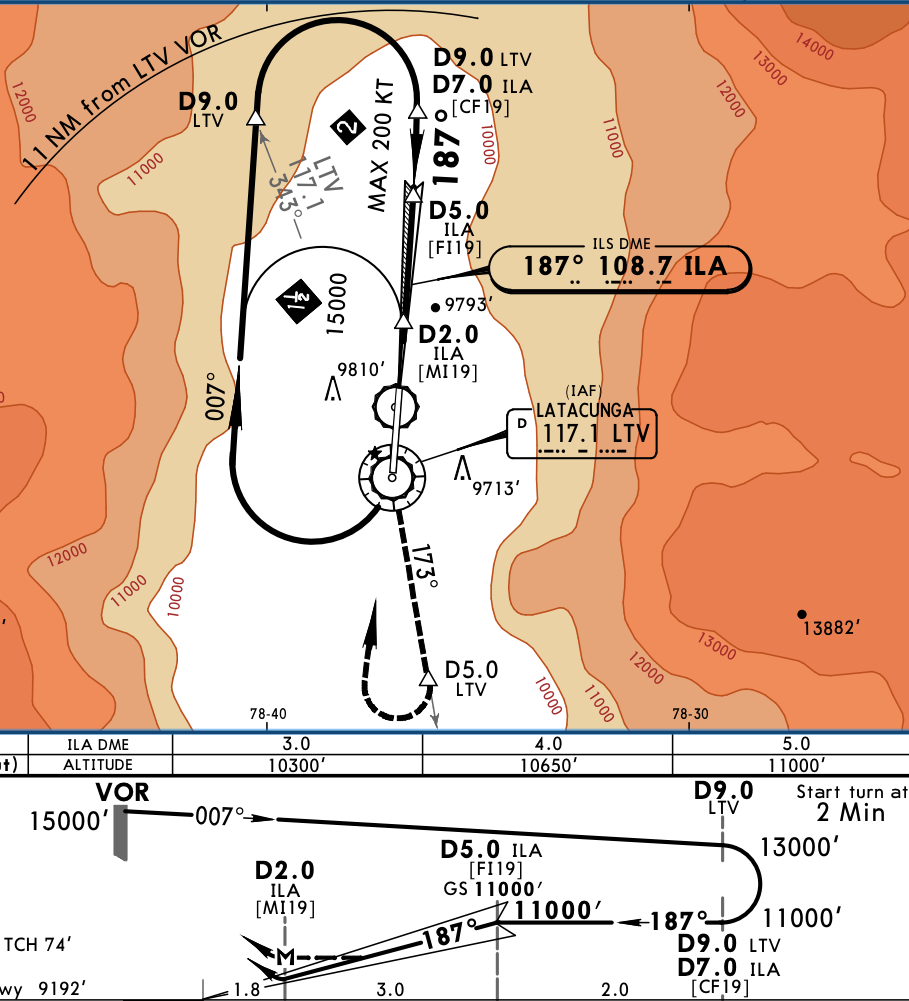 You arrive over the VOR, enter the hold and descend. The airport is at 9,200 feet and after turning North, I broke at 13,000, cancelled IFR and entered a very high right downwind for runway 19.  A Cirrus with full flaps and composite prop drops like a brick when power-off, so we had no trouble getting down.

Why did I cancel? Latacunga doesn’t have avgas. In fact the only airport that does have avgas in the whole country is Guayaquil (SEGU). By choosing the longer, coastal route, we committed to fly there and refuel, we didn’t have enough to return to Cali. However, I didn’t want to waste more than necessary by flying out 9 miles before turning back. We landed with 48 gallons left, which is more than enough for a 45 minutes flight to Guayaquil.

Remembering our experience in Cali, we did hire a handler in Latacunga and the inbound processing was a breeze, we got out of the terminal in less than half an hour.