Suitcases, packing, last minute shopping, vaccinations, and cramming for the South Africa written test. I must be enjoying taking tests, because last year I took an EASA written in Air Law and Human Factors for the conversion of my FAA license to the European one. This year it is only Air Law for the South African conversion. Luckily, there are apps to prepare, hopefully they got questions right. I am using Foxone.

While lot of ideas are similar to United States, there are notable differences. The airspace looks more like in Europe, with various control areas and zones. Class A starts at 20,000 feet, there is a separate night rating.  There are funny things, for example you may have an electronic logbook, but you must print it every 30 days. Medical for over people 40 is valid only 12 months and the license has to be renewed bi-annually.

Would you guess what these two visual ground signals indicate? Turns out that one the right one indicates that aircrafts are required to land and take-off on runways only. Uh? We need a sign for that? So what about the one of the left?

One particular regulation that is more stringent than elsewhere, but struck me as having sense is that to fly IFR, you need to have either two pilots or a pilot and a George (two axis autopilot).

All flights and hotels are now booked, except in Cape Town, where we are going to stay in a lovely Airbnb. Thanks to Sjoerd van ter Welle, who organizes the Ultimate Self-Fly, we are going to have dinner in one of the most sought restaurants in Cape Town, if not the world: Test Kitchen – impossible to get a reservation for an ordinary human being. Let’s have a non-aviation picture here for a change.

This is our bucket list item, to see the Namibia dunes. 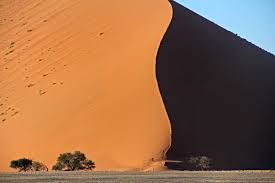 Since we will be already in South Africa, practically next door, we couldn’t skip the opportunity to go there.

The original idea was to skip the last return leg from Maun to Gabarone and instead fly to Windhoek, see the dunes at Sesreim (there is conveniently an airstrip at the entrance to the park) and return via the Skeleton Coast and Luderitz to Cape Town. 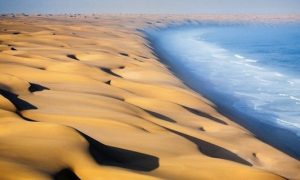 The only trouble was, we were supposed to fly a Cessna 172M. For those who weren’t born when that model was manufactured, that airplane has 150HP engine and 38 gallon tanks.  The terrain out there is sort of unforgiving with no trace of human activity for hundreds of miles. A bit of headwind, maybe tired engine and airframe and we would be camping out there for several months until somebody finds us. 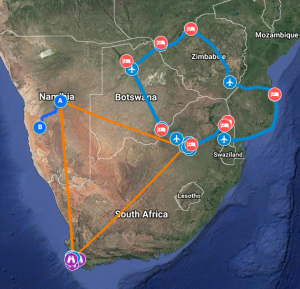 After due exercise of my superior ADM skills (for non pilots reading this, that’s Aeronautical Decision Making – FAA loves acronyms), I decided to scrap that idea and we are flying commercial: Johannesburg to Cape Town, 5 days to visit the city, than Cape Town to Windhoek, rent a car, drive to see the dunes, and fly commercial Windhoek back to Johannesburg.

For those who think that I chickened out, the map shows distances.

We will spend the month of June to fly around South Africa, Mozambiq 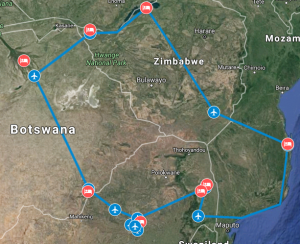 ue, Zimbabwe, Botswana and Namibia. Here is the first part of the trip, starting in Johannesburg, first stop in a private game reserve in Kruger National Park, than along the Mozambique coast to Vilanculos, up to Zimbabwe and Lake Kariba, Victoria Falls,  Okavango Delta in Botswana and return to Johannesburg via Gabarone diamond town. Click on the map to see details.

All the flights in a trusted Cessna 172, that will be quite a change from our Cirrus, but it seems that a Cirrus would be somewhat out of place in the African bush. Plus, we couldn’t find one to rent!

The second part of the trip will take us to Cape Town, with a side jump to Namibia, we still are working on the details of that leg.