In January 2018, I organized another trip to Mexico, this time we visited Baja California. This the 5th year we are bringing gringos to Mexico. The official purpose was whale watching in Magdalena Bay, but everybody knew it was just an excuse to go flying.

We left home Wednesday afternoon and flew to KSAN (San Diego International), Lindbergh field. I prefer that airport to smaller General Aviation airports, such as Montgomery Field, because it is close to downtown. As class B airports go, this is one of the easiest in the country.

On Thursday morning, we flew from Sand Diego to Loreto. My preferred AOE (Airport of Entry) in Mexico is San Felipe (MMSF),  they are by far the fastest and most efficient, unfortunately San Felipe didn’t have fuel at that time. If you plan to use that airport, make sure to call ahead of time to check fuel status.

Loreto is a bit larger and unfortunately, quite more bureaucratic, it took as about 1.5 hours to fuel-up, prepare flight plans and go through customs and immigration. And one point, all immigration officers disappeared, because Alaska Airlines landed. One airplane in our group was asked to carry suitcases to the office for inspection. While the customs officers are perfectly in their right to request that, in my 15 years of flying in Mexico, I was asked for that only once. To return to our airplanes, one has to go through a ridiculously superfluous security checkpoint. In contrast, the large commercial airport in San Jose del Cabo, where we were in November 2017 does not require jumping through these hoops.

On Thursday  afternoon we met all the group in Rancho Las Cruces, a seaside beach resort located on a natural sanctuary of more than 10,000 acres and 7 miles of private pristine coastline. The hotel is situated along the beaches of the Sea of Cortés, about 15 min flight from La Paz.

Most important though, the hotel has its own airstrip. Part of the magic of flying in Baja is just that, park your airplane and walk to the hotel. Unfortunately, there are fewer and fewer of such places now, because security measures are often too expensive to keep strips open. The approach and landing at the strip are not particularly difficult, but they are interesting. 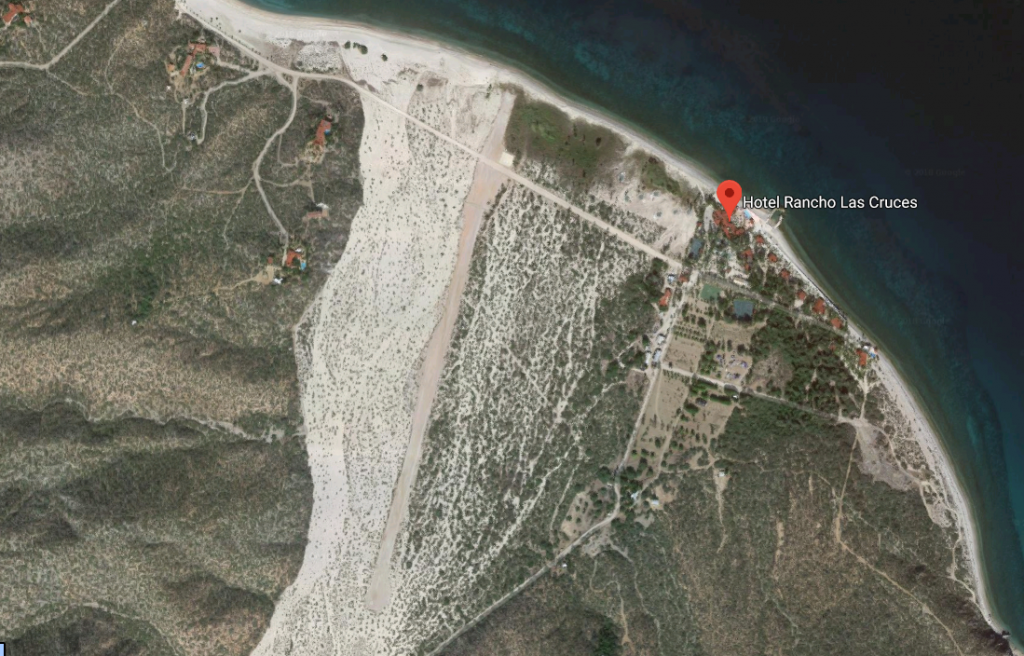 Most of the strips in Baja do not have any terrain around and just looking at Google Maps might suggest the same is true for Rancho Las Cruces. This is where it pays to be more thorough, because here how it looks on Google Earth, looking south-east, i.e from the sea. 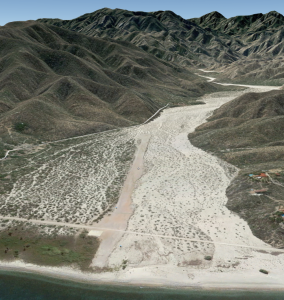 Landing towards the West may be impractical due to rising terrain and prevailing westward winds. Landings towards the East requires flying close to terrain in what looks like a canyon, following a dry river bed.

All the participants were provided with information about the strip, with photos of terrain and a video of a Cessna Caravan pilot landing there. They were also advised the strip was challenging and if not comfortable, they should land at the commercial airport in La Paz, which is only one hour by car.

I decided to land at the Rancho’s airstrip and flew along the coast southband, to determine the wind and airstrip condition. Winds were generally from the east at 12-17 knots, depending on the altitude and this, together with the terrain made me decide to approach and land to the east. Here is the video of our landing.

The approach looks very flat in the video, but this is an optical illusion due to the position of the camera.

We spent the next day relaxing at the hotel, trying out local margaritas, catching up with old friends and making new ones. Friday morning, it was time to depart for Magdalena Bay and the winds were again favoring takeoff towards the sea. Since there were people filming our departure, I stayed in ground effect until the departure end, before pulling up. The video below offers the opportunity to admire my soft field takeoff technique from the ground and from the camera attached under the wing.

It was a short flight towards Magdalena Bay on Friday morning, only about 130 nm. Approaching the Pacific coast I became concerned we might be unable to land, due to low level bank of fog and low clouds covering the airstrip. That turned out to be a false alarm, a large hole in the clouds was open over the Bay and we landed without any trouble. In the video below, the camera was attached below the wing, as in the inset for the takeoff video, but it tilted in flight.

Notice a red cement pad at the begining of the airstrip, this is a runup area. You definitely do not want to touch down at or before the pad, unless you want to have your landing gear forcibly retracted.

You might also have noticed that I swerved to the right after touchdown. This was to avoid a flock of birds that were sitting imperturbable at the middle of the runway. I thought they won our little game of chicken and rolled to the right to avoid them, but somewhat predictable, they flew away after few seconds.

There is a short 15 min walk from the airstrip to the marina, but we got a ride in a car and we hoped on a small boat to cruise the lagoon searching for whales. And they were there.

After a quick lunch in a local eatery, we returned to the airplanes for the flight to Mulege, but due to lack of fuel in San Felipe, we stopped en route in Loreto. Without hassles of immigration and customs, refueling and flight plans took about 30 minutes.

The airstrip adjacent to the hotel is in good shape, just make sure you don’t land on or before the cement pad used for runups.

Hotel Serenidad in Mulege is a fixture in Baja flying, it was one of the first places welcoming aviators. Their Saturday night roast pig with live music was quite famous. I called ahead of time to make sure that the tradition is still alive, in spite of being assured on the phone this was still the case, we had a simple pork rib buffet and no live music. But the margaritas were as good as ever – the barman Román works there for long time and he hasn’t lost the touch with his tequila.

After a somewhat wobbly wake-up on Sunday and a delicious breakfast, we said goodbye to the whole group and flew away home. The stop in San Felipe was the fastest I ever experienced – 10 minutes for immigration, customs and flight plans. Hopefully, next time they will have fuel.