It’s been a long, long time since I flew in a glider so while driving through French Alps towards Mediterranean, it occurred to me that this would be the perfect place and time to remind myself what the joy of soaring is all about.

There are many soaring places in the mountains and I reached out to a friend who helped me identify a few: Saint-Crepin, Sisteron, Gap, Vinon, Fayence. After couple of phone calls, I had an appointment at Aeroclub Alpin in Gap for a 45 minutes discovery flight. 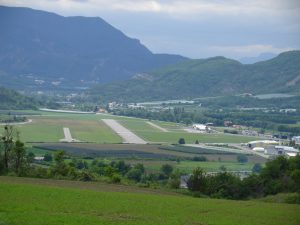 Since it’s been a while since my last glider flight, I didn’t know local terrain nor how one operates at this airport, I hired an experienced pilot and instructor in the back seat to help me get back into the saddle. The first surprise was how they towed the aircraft for the launch by simply attaching it behind a truck. With a wheel dolly attached under one wing, there was no need for any additional help. After a quick preflight, we were ready for our flight in a Grob-103, a glider I am very familiar with.

We launched from the runway 21 and detached from the tow plane at about 3,000 feet AGL. The goal was to reach a nearby mountain, about 10 miles away, shown with the arrow below. 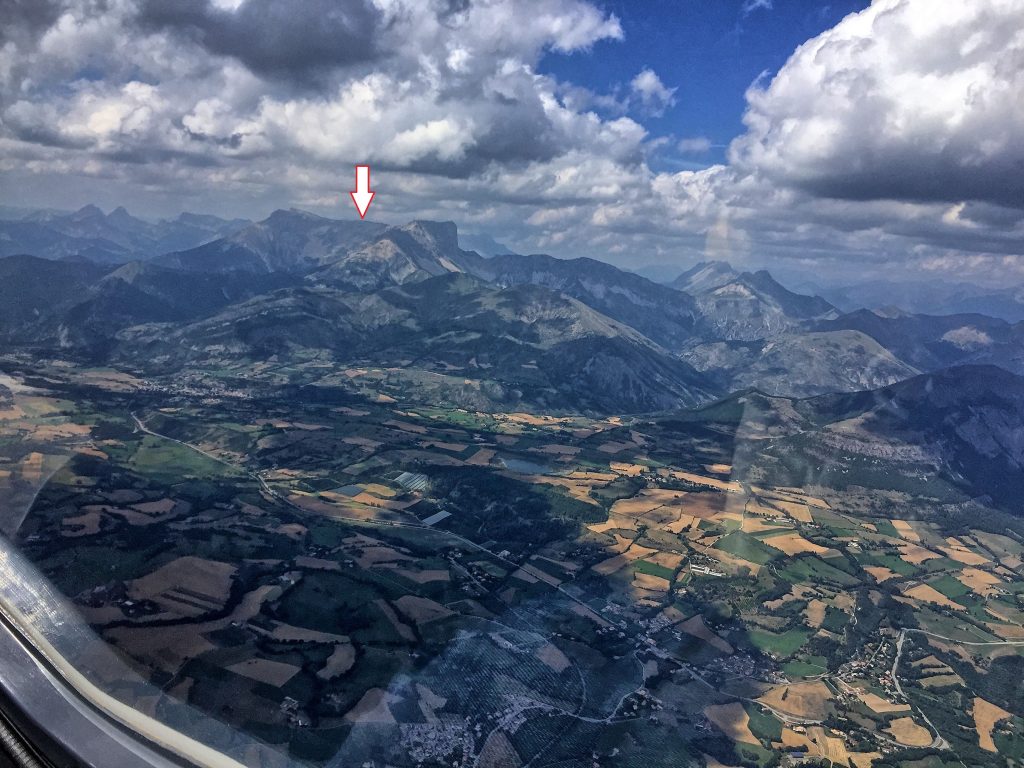 Ten miles doesn’t sound like much, but let’s not forget that a glider doesn’t have an engine and the only way to advance is to loose altitude, which altitude has to be first gained. There are several ways that a glider can climb, all using the fact that air moves up in certain places and if the glider happens to be there, it rises together with the air.

The most common technique, which we used that day was thermal soaring. It occurs when a column of air is heated near the surface and rises, typically until a cumulus cloud that caps the ascent. So off we went chasing one cumulus after another. Once you feel the lift and it is sometimes literally is a bump, which starts raising one wing or the whole aircraft, you enter a tight turn trying to circle within the thermal. That is easier said that done, since you can’t see that raising air, only a variometer (a sensitive vertical speed indicator used in gliders) shows if you are climbing or descending.

In addition to thermal soaring, we also tried ridge soaring, where you use the fact that wind blowing into a hill is deflected up by the terrain. For that, you have to be pretty close to the said ridge, hundred feet or less.

The instructor kept asking me how I was feeling. I forgot somewhat how tight the turns are in thermals and how long they last. The turns together with bumps made me a bit dizzy, but not enough to say anything else than a valiant “Great!”. He was so happy to finally fly with somebody who wasn’t airsick, that what supposed to be a 45 minutes flight turned out to be about three hours. He told me later that he often has to terminate discovery flights after 15 minutes.

That day it took us over an hour to get to our mountain, the gods of lift where making us work very hard. But when we finally got there, it was magical.

Here is where flying a glider is so much fun. You get to fly to much closer to terrain, you have an impression of wearing an aircraft instead of sitting in it, the noise is much less and different and you can never forget how far and how high you are. 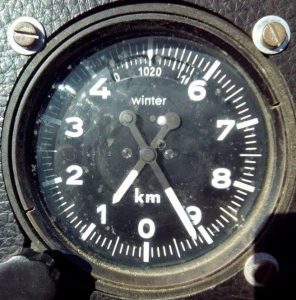 Speaking of height, it turns out that gliders in France use meters for height, while power planes use feet. In addition, the altimeter in this particular glider was inverted, with the zero at the bottom, so I first had to think what the arrows were really telling me and than convert it into feet, so that I know what it means. I thought that only French would be devious enough to invent such an instrument, but apparently this is used in gliders in other countries too.

If you never flew a glider, find the closest place that offers the training and get a glider license. In the Bay Area, you’ve got NCSA at the Byron airport, where I used to tow gliders a while back and Hollister Soaring Center. You will learn about flying from that and you will become a better pilot.

In July, I was able to fulfill the dream of flying in Courchevel. This is truly one of the most extraordinary airports in the world, located in high French Alpes mountains at 6,000 feet altitude. It is one way in and one way out and you need to have both French mountain rating and a special endorsement to fly there yourself. Since both would take more time than I had, I hired a local instructor from AeroSavoie and a Cessna 172. 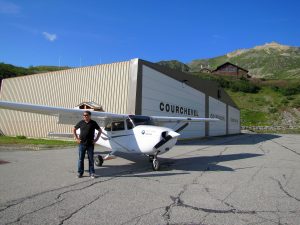 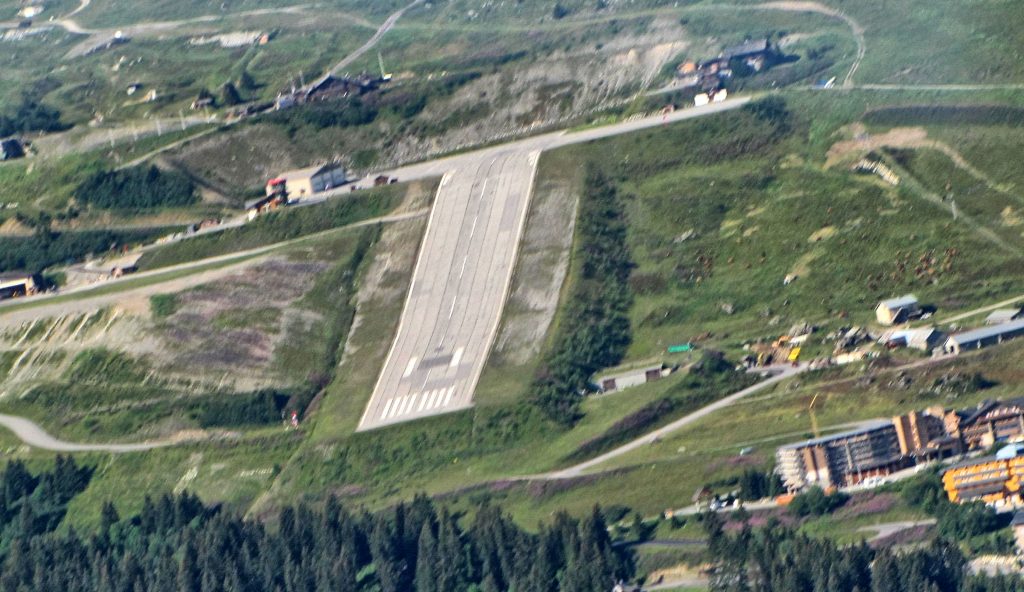 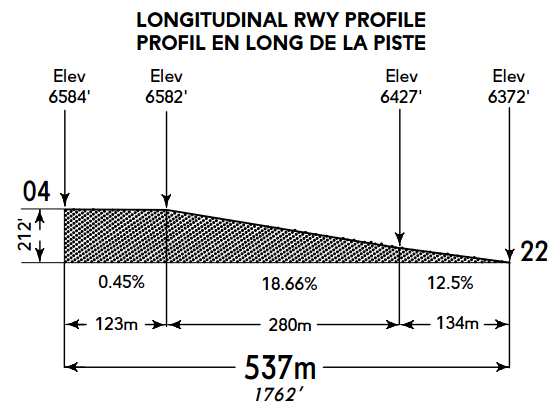 When you line up for the takeoff from runway 04, you only see the first 370 feet, which does look awfully short, like this. 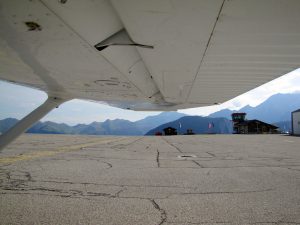 You add full power, check oil and engine gauges, check the wind and release the brakes. The airplane is barely moving when you reach the descent point, but since the runway drops down after that point, you pick up speed really fast and the takeoff becomes a non-event.

For the landing, the goal is touch down in the first “flat” 400 feet of the runway 22. As long as we are in agreement to call 12.5% upslope “flat”. To do that, you have to aim before the threshold and in this case it also means below the threshold. If you don’t touch down in the first part, the following 18.6% upslope will basically slam into you. After the touchdown, you have to increase power to climb upslope.

I did four patterns with a somewhat young and impatient local instructor, who urged me to correct immediately each small speed excursion. Which I did, except using small corrections, such that to avoid overshooting. You know, smooth pilot etc… We did land safely each time, see for yourself.

Next time I am in the Alps, I’ll do the mountain rating and fly to some other fun mountain strips.

In July we had an opportunity to fly from Paris to Bilbao and visit Chateaux de la Loire on the way back. What a treat.  You may want to skip the first part if you are not a pilot.

Our friends Denis and Sophie took us to Bilbao and Denis was brave enough to let me fly his immaculate Cirrus SR22. With tail winds, the flight from Toussus le Noble, a GA airport close to Paris, to Bilbabo took 2:30. We flew IFR, because crossing the border (yes, they still have borders between France and Spain) would require a flight plan and squawk code anyway. Denis was working the radios and although I am fluent in French, I had initially some trouble understanding the phraseology. In fact, IFR is easier in such circumstances for a visiting pilot, because you get more hand holding. Denis Cirrus is N-registered, which would allow me to be a PIC based on my FAA license – my EASA conversion, which I would need to use to fly any European registered aircraft is VFR only.

The air was calm at 9,000 feet and the sky clear, except until we were close to Bilbao. An overcast layer forced us to fly an ILS approach. The airplane has dual GTN650, a DFC-90 autopilot and and Avidyne screen, the setup I am very familiar with, so I didn’t think I would have any trouble flying this approach. Denis had Jepessen approach plates, which I reviewed and didn’t see anything unusual. Here is the plate I found online, it is not Jepp, but the information is similar.

If you just load the approach as usual, you will have trouble identifying 4,900 step down fix from BLV, because it is not in the navigator database. Might be that’s why the approach plate says DME required! The easy solution is of course to set up BLV (or IBLV) as a waypoint on the #2 GPS, so that you can see the distance. Otherwise, during the approach, you will have to do the subtraction BLV 15 – BLV 12.9 to figure out that fix is 2.1 nm from FAF. After Denis suggested setting up #2, I was already very high on the glideslope and technically, we should have gone missed. But this was gentleman IMC and the ceilings were high enough, so we continued and landed.

The DME is in fact mandatory in Europe for approaches like that and they do not support using GPS in lieu of DME, as we do in US. In fact, even ADF is mandatory if the approach plate says so. I saw weird panels with the latest Garmin Perspective and 30 years old King ADF box squeezed in the middle. Somebody should tell EASA that we are in the 21st century.

Handling is mandatory in Bilbao and we paid about $200 between handling fees, landing fees and various taxes. Think about it the next time you complain about that $25 a FBO charges you if you don’t take fuel.

The main Bilbao attraction is of course the Guggenheim museum. 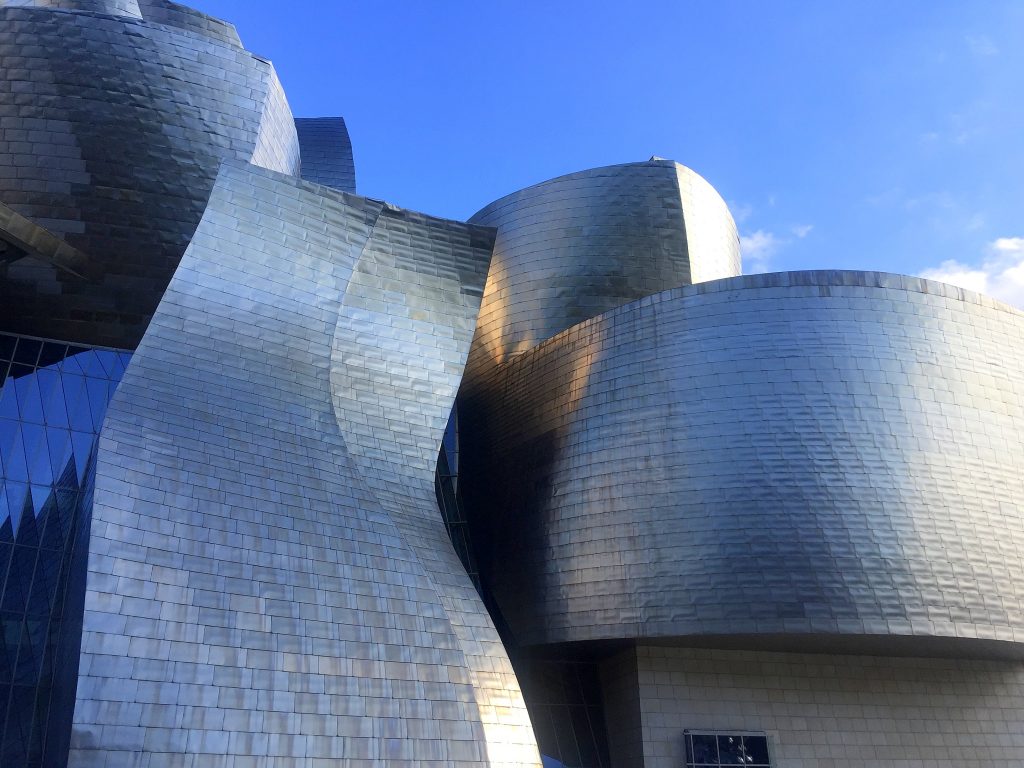 If you’ve been to Southern California, you might think they did copy Disney Hall in Los Angeles, but that would be the same as saying that Neuschwanstein Castle in Bavaria is modeled after Disneyland (I actually did hear that exact thing being said by an American couple strolling through the castle). Frank Gehry designed Guggenheim Bilbao in nineties and the museum opened in 1997.  He followed with Disney Hall, which was opened in 2003. 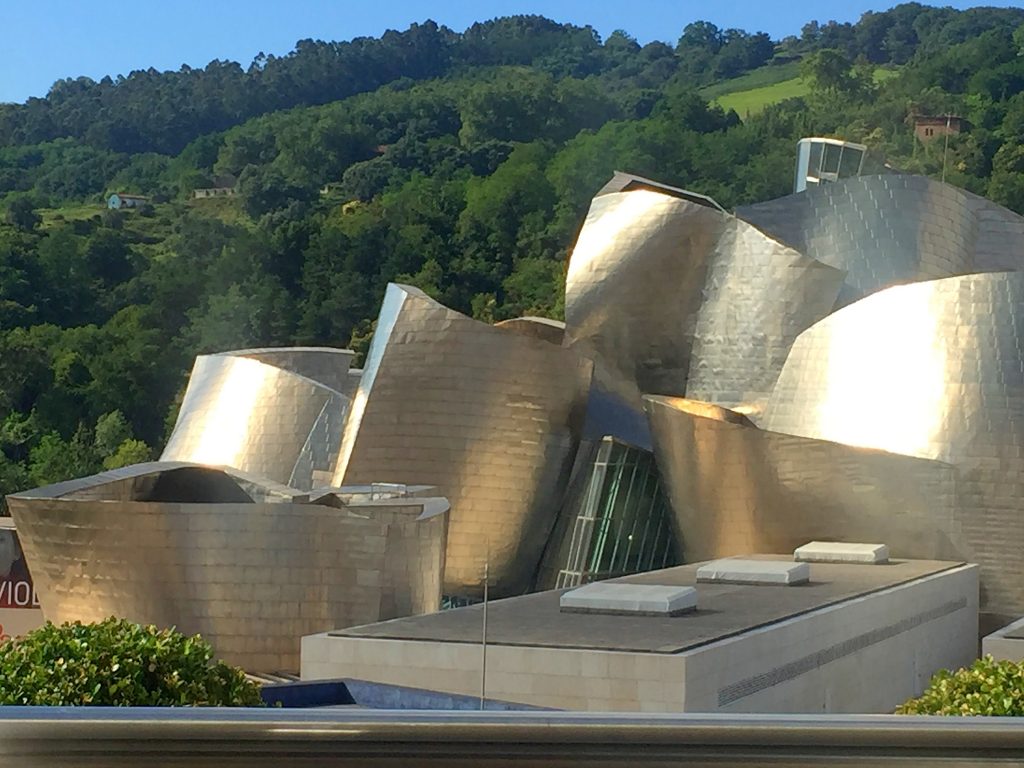 The Bilbao puppy next to the museum is endearing and we probably took thousand pictures of it. 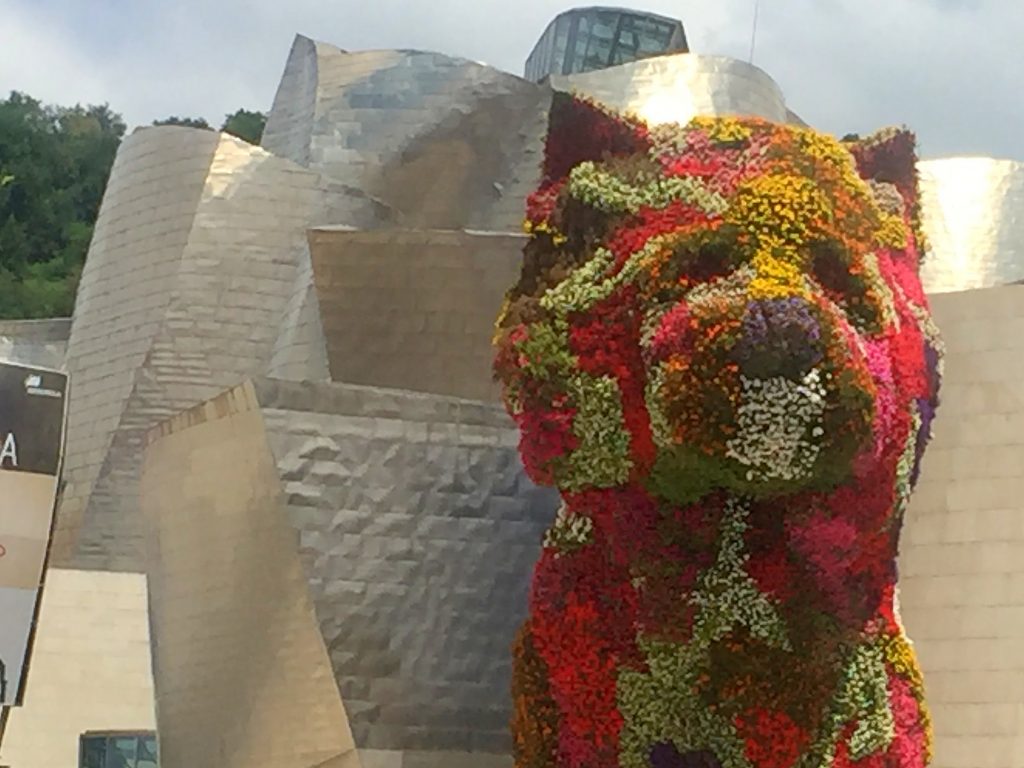 We departed Bilbao IFR and this time I was also manning the radios – in English, because I don’t speak Spanish and with Denis help. We soon were switched over to French controllers and I continued in English, but than we decided to land in Poitiers and refuel and somehow, we switched to French. It was actually relatively easy – speaking French is a definitive advantage if you fly there. A LPV approach was a piece of cake.

After Poitiers, we continued VFR at 1,500 feet, to visit Chateaux de la Loire. It was bumpy, but worth it, we saw Loche, Chenonceau, Amboise, Blois and Chambord.