Our trip to South Africa in 2017 was magical, but Africa is addictive, once you’ve seen it, you can’t help to want to see it again. And again. So we return to Africa.

We have even more grandiose trip scheduled for July 2019 – it is long time to plan, but it is not your garden variety of cross-country flight. To wet the appetite, here are the highlights: 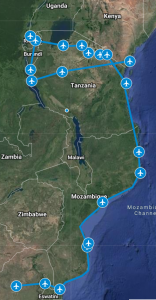 It will take us three weeks and the schedule is built to allow for one day of flying, followed by one or two days at a given location. The majority of flights are less than 2 hours, with not more than 3 flights per day in Cessna 182. It will be a small group,  four or five airplanes flying together.

First part of the trip takes us through Mozambique and the unspoiled beaches of Indian Ocean, I plan to stay low at 500 feet to enjoy the scenery. After visiting the capital, Maputo, we are heading to Bazaruto Island. One of the greatest pleasures of traveling in a light airplane is when you can land on a dirt strip and walk to your hotel.

Our second stop is to visit Ilha de Moçambique half way up the coast, a small crescent shaped island where time stopped, tourists didn’t yet arrive and African, Portuguese, Swahili, French and Goan flavors mix  in a potent melange.

We will continue heading North along the Indian Ocean coast, cross into Tanzania and head towards the island of Zanzibar. When Tanganyika and Zanzibar joined each other in 1964 to form the United Republic of Tanzania, Zanzibar kept a semi-autonomous status, with Stone Town as its local government seat. Its architecture, mostly dating back to the 19th century, reflects the diverse influences underlying the Swahili culture, giving a unique mixture of Arab, Persian, Indian and European elements.

While we will not be able to overfly it, since it rises to almost 20,000 feet, we will fly by and around Mount Kilimanjaro after a 2-hour flight from Zanzibar and land in Moshi, the town at which the majority of trekkers start their Kilimanjaro ascent, and as such has a vibrant feel while still being typically laid-back African.

Departing Moshi, we will route past or over the volcano of Mt. Meru and continue towards Ngorongo Crater. This is our highest altitude airfield at 7,800 feet, with a view into the crater on final approach. Approximately 2.5 million years ago, the Ngorongo crater was a huge volcanic mountain, rivaling Kilimanjaro in size. This changed when the top of the mountain collapsed, creating the biggest volcanic caldera in the world.  The park is teaming with wildlife, with animals such as zebra, buffalo, hyenas, wildebeests and lions thriving in the area.

After couple of days at Ngorongo, we will fly north towards Kitumbeine  Ol Doinyo Lengai volcanoes, over the oddly-colored Lake Natron sporting colonies of flamingos before turning west towards Serengeti, taking our time in the air and go in search of the Great Wildebeest Migration – it’s a true privilege to be able to see the sheer size of this spectacle from the air and piloting one’s own aircraft provides the freedom to explore all corners of the Serengeti at will.

After leaving Serengeti plains we will head towards the mountains of Rwanda, first Kigali and than Ruhengeri to admire the Volcanoes National park from the air before entering Uganda and stopping for the night at Lake Mutanda. We will spend the next day at Bwindi Impenetrable National Park, an ancient mountain and lowland forest spanning 128 square miles and home to the largest population of mountain gorillas. There are fewer than 900 of them in existence and we will have a rare opportunity to observe the everyday interactions of these gentle, mysterious primates. To see them from few meters away, we will pay a price of couple of hours hiking in the forest. 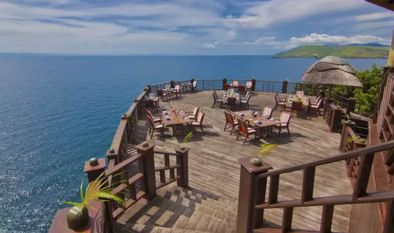 Time to return to Rwanda and fly back into Tanzania for an overnight stop in Kigoma, relaxing with unparalleled views on the Lake Tanganyika, before following the lake shore next day for a flight to Mahale.

Very different from anything else Tanzania has to offer,  Mahale Mountains National Park is set in the far west of the country. Remote and beautiful, this off-the-beaten-track destination is quite possibly the best place in the world for chimpanzee safaris. We hope to come close to them during our next day hike in the forest.

Time to head back – after a refueling stop in Tabora, we will cross Kenya border and terminate the trip in Mombasa.

Three weeks, about forty hours of flight time, four thousand nautical miles,  we expect to bring back terabytes of pictures and videos and the most precious – memories.