We stayed in B.O.G Hotel, a modern and convenient hotel, but not located in Candelaria, Bogotá old town. Quite a few websites and many people told us to stay away from that area at night. Uber and taxi in Bogotá are available everywhere and are very inexpensive, so the location mattered less. 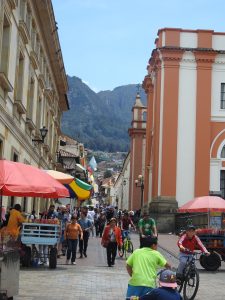 The first day we visited the city with our friend Inès, starting with Museo del Oro. It is a must-visit telling history of metallurgy in pre-colonial times with obvious focus on gold. After a quick lunch we walked to Museo Botero It only has few Botero sculptures, but has many of his paintings and drawing, which I didn’t know much about.  We than tried to get to the Monteserat cable car to admire the city from up high, but it was Sunday and the line was too long.

The next day, we drove back to the airport. The idea was to start with a local scenic flight and than do an oil change, taking advantage of the Aeroclub maintenance facilities. Flying VFR in Colombia is not much different from IFR. You must have a flight plan, you get a squawk code, you are talking to ATC and you must request permission for attitude or heading changes. We drove to the operations office on the other side of the airport, filed our flight plan and paid 240,000 COP ($85) for the privilege. Flying low over Andes foothills was a thrill and we enjoyed the scenery very much. I was happy to have Karel in the right seat working the radios in Spanish. Michael flew 1 mile in trail in loose formation and I had to be careful to announce any heading and altitude changes.

We returned back to Guayamaral safely, but with less fuel reserve that I would have liked and we taxied to the maintenance. At that point, we were already 30 hours after departing home and last oil change. We didn’t replace the filter, just dropped and replaced the oil. I also took advantage of having the cowl off to adjust the manifold pressure.

After returning back to the hotel and some rest, we went to dinner to Leo Cocina and Cava, probably the best restaurant in Bogotá, if not in Colombia. This is a fixed menu dinner, the only choice being between 12 or 8 courses. Somewhat cowardly (or reasonably, depending how you look at it), we chose the eight courses. Half through the eight, I wished we chose twelve. The variety of tastes reminded me Test Kitchen in Cape Town, the New World has definitely a lot to teach to the Old World.

Our next leg was bringing us to Popayan and what should be a simple 1.5 hours flight turned out quite interesting. First, Guyamaral is VFR-only airport and there are no IFR departures. Our IFR plan assumed an IFR clearance on departure and that wouldn’t work. There are however VFR departures, so we dutifully copied waypoint GPS coordinates to Foreflight. Just filing three flight plans in the operation office and paying the fees took 1.5 hours. Suddenly, Mexico becomes a model of efficiency!

The airport is very busy and I waited good 10 minutes to be able to insert a word on ground frequency and get a clearance to taxi for takeoff. After takeoff, we were switched to Bogota approach and instructed to maintain 11,000. This would be bringing us skimming tops of mountains and into IMC and we were still VFR. I was told that VFR in Colombia is a bit of relative term, but I really didn’t like the idea of getting into IMC without a good understanding of where the terrain was. Michael, who was in front of us was requesting higher and ATC was not accommodating, so I decided to assert my PIC authority. 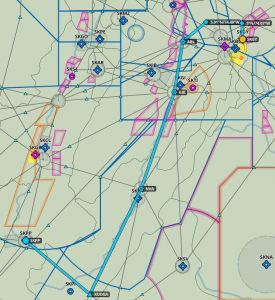 and the controller simply acknowledged and switched me to a new frequency. We eventually climbed to 14,000, which was the correct altitude according to hemispherical rules and were mostly VMC between layers, with occasional light turbulence in clouds. Later on, we had to climb to FL180, because MEA on the dogleg before Popayan was that high, a remainder that Andes are not far. Michael was first and he reported that at that altitude he was in IMC and picking up ice very fast, John had FIKI on, so I requested and got FL200 to remain on top. We arrived to Popayan VOR at FL200 and the airport is at 5,600. 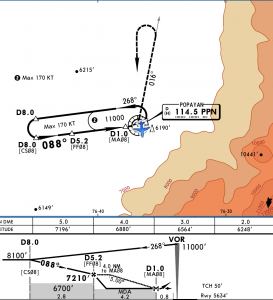 The VOR Y approach is designed to facilitate arrivals, because you can descend in hold. I did one turn in hold and when Michael landed, I requested and got a descent to 16,000. Few minutes later John went missed, because he arrived over the airport at 11,000 in IMC. At that time, I was close to 8 DME west of PPN and could see the ground through a large hole. Bases were about 9,000 and with airport at 5,600, there was more than enough clearance, so I cancelled IFR, spiraled down to 12,000 and went visual to the airport.