Quito and a bad magneto

Perched high at 9,300 in between Andes peaks, Quito’s historic center has one of the largest, least-altered and best-preserved historic centers in the Americas. Quito and Kraków, Poland, were the first World Cultural Heritage Sites declared by UNESCO, in 1978. The central square of Quito is located about 16 mi south of the equator.

We landed in Latacunga, about 2 hours south of Quito, because the landing fees at the new international Quito airport are prohibitive. I was hoping we would catch a glimpse of Cotopaxi, an almost 20,000 feet high active volcano, either during the approach or when driving to Quito, be overcast skies didn’t cooperate. 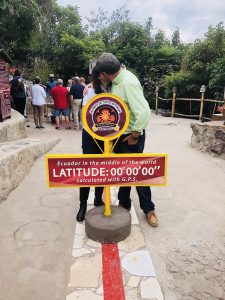 The first day in the morning, we drove to La Mitad del Mundo (the middle of the world), monument and museum marking the general location of the equator. It is so named to avoid confusion, as the word ecuador is Spanish for equator.  Since this is one of the main tourists attractions, they cleverly have couple of areas marked as latitude 0°0’0’’. There is the one that was established in XVIII century by Franco-Spanish geodesic mission, there is also the modern GPS version. After taking mandatory pictures stranding the equator and kissing over it, we returned back to Quito, to visit the historic center.

We stayed in Mansión del Angel in Quito, a boutique hotel that used to be the home of an Ecuadorian tobacco tycoon and which has been completely restored.  The staff was wonderful and they were very helpful when we had to return to the hotel after our airplane engine troubles (read on).

The next day, we drove to the market in Otavalo, the largest outdoor market in South America. Strolling among the stalls, we bought couple of small souvenirs and than stumbled upon a colorful painting, which we both liked very much. The usual and mandatory haggling over price didn’t yield much, we only got 10% off, so we walked away. After making a tour, we came to our senses and realized how ridiculous it was to walk away from something that we both liked so much over basically misplaced ego – that the vendor didn’t want to lower the price. Considering what we were already spending on this trip, this was below noise level. We went back and bought it. That is after all the true meaning of the word souvenir. We will now remember Quito every time we look at the painting.

This was what we thought the last night in Quito and the next day we drove back to Latacunga to fly to Guayaquil, which was out of the way further South, but is Guayaquil the only place in the whole country with avgas. After a normal run-up, I was in for rude surprise in climb. The engine was unusually rough, shaking quite a bit during climb and the CHTs were rising much too high for my liking. I decided to return the airport. Redoing the mag check on the ground caused the engine to quit on the left magneto.

This wasn’t exactly the most convenient place for engine troubles. It was Sunday, nobody knew if there even was a mechanic on the field and we weren’t yet completely sure about the root cause. The airport is located at 9,000 feet, in a valley, surrounded by Andes rising up to 20,000.

After a mandatory call to Cirrus whisperer and guru Jim Barker at Aviation Vibes in Wisconsin, the consensus emerged that it was indeed a bad mag, after eliminating the competing hypothesis of bad ground wire. Great, now we just need a new mag. In Ecuador, at almost deserted airport on Sunday. Clearly, that wasn’t going to happen, so we returned to Quito, all the time on the phone in feverish search for the part. It became quickly clear there was none in Ecuador and we have to import it. There is an outfit called Aviall that specializes in rescuing AOG (Aircraft on the Ground) with spare parts worldwide. The website says:

We understand that there’s a real sense of urgency when it comes to aircraft repairs. It can lead to a tense scenario — especially if a plane is grounded until parts can be replaced. That’s why Aviall offers 24/7/365 AOG service. With our global presence and counter–to–counter delivery, we get our customers the parts they need to get the plane back in the air — fast.

That sounds perfect, so I call them:

Me: I need magneto in Quito, Ecuador.
Aviall: Sir, do you have an account with us?
Me: I don’t.
Aviall: You need to first open an account. Our customer service department is closed on Sunday and they are the only ones who can open an account. No, I cannot take your credit card, you need to call back on Monday.
Me: I’ll have somebody with an account order that for me. What about shipping?
Aviall: Let me check, I’ll call you back. <calls back after 30 minutes>. We can ship it with Fedex.
Me:  What about customs?
Aviall: Uhm? <Blank stare, if I could see it>. I am not sure.

This is a company, which website boast about helping hundreds of aircrafts. Except not on Sunday and not in Ecuador. Back on the  phone with Jim who has the mag in Wisconsin, but how do we ship it? Couple of phone calls later, we realize that using something like Fedex will cause the part being stuck in customs for an undetermined amount of time. Perhaps air cargo? There is a Delta flight leaving Minneapolis at noon on Monday, arriving to Quito at midnight. Jim tries to contact them, but he is unsure about customs. I check other flights and find an Avianca flight leaving Quito at 5:20 am, arriving Miami at noon and return flight leaving  Miami at 5 pm and arriving Quito at midnight. Jim calls Pete Lo Bello from Advanced Aircraft in Miami and Phil has the part. I buy a ticket and and order a taxi for 3 am Monday morning.

That just leaves us with the task of finding a mechanic. José in Cali knows a mechanic in Quito. We call Augustin and learn that yes, he works on piston aircrafts and says he can replace the magneto and time it. He doesn’t speak English though.

On the way to the airport, the taxi has a flat tire, but the driver has a spare and I manage to catch the flight first to Bogotá and than to Miami. Getting out of immigration at about 1 pm, I wait at the curb and Pete’s son arrives with the mag, hands me over the box and leaves. I’d rather put it in a bag to raise less suspicions at customs in Quito, so I try to open it, but really need a knife. At the airport’s shop, a clerk looks at me as at a simpleton: Sir, we don’t sell knives at the airport. The fact that we are outside the security zone doesn’t seem to register with her. She is willing though to open the box for me, using her own, presumably security cleared knife.

That was a bad idea, taking the mag out of the box and putting it in my bag will certainly cause it to be damaged in transit. I look for another airport shop with packing tape, reseal the box and go to the luggage shop. They have a canvas bag that fits the box. I check in the bag at Avianca counter for the return flight. Pete has a friend in Quito who might help with the mechanic. I call Javier, who is a pilot, but he gives me the number for Xavier, who owns a maintenance shop in Guayaquil. Xavier can send in a mechanic, but only on Monday afternoon. The mechanic would have to fly commercial from Manta, where he has a scheduled job in the morning to Quito and than drive to Latacunga. In the meantime Xavier calls Augustin to chat with him about what needs to be done and calls me back to reassure me that Augustin is fully capable of doing the job. I decide to stick with Augustin.

With all these calls, it is already 4 pm and I board the return Avianca flight to Quito via El Salvador. Arriving to Quito at midnight, I anxiously wait at the baggage claim. Yes, my bag is there. It is black, with red FRAGILE stickers, because I recently read a travel tip that fragile items tend to come out first. Approaching customs, I see that they put everything through an X-ray machine, but the agent is chatting with the second agent and not even looking at the screen, which shows big black hole with my mag in it. I grab a taxi and arrive to the hotel 22 hours after departure. It is now 2 am Monday morning.

Wake-up at 6 am and we leave the hotel at 7 am for a 2 hours drive back to Latacunga. Skies are clear and we can see the famous Cotopaxi volcano on the way, maybe a good sign?

Augustin is waiting for us, we drop the cowling and he starts to work to remove the bad magneto. Each time he unscrews something, I can’t stop wondering if he will know how to put it back. The mag is off in short order though, he puts the new one and we need to time it. On a TN aircraft, to get to top plugs, one has to have either a special wrench, which we don’t have or to remove the intercooler. We don’t have the former and I don’t like the latter, so I call Jim and he says to just use bottom plugs. I am also able to confirm that the mag was indeed bad, turning the drive shaft doesn’t turn the plastic gear and that we replaced the correct mag. Augustin puts everything back, I do a ground mag check and engine works on each mag. I do a short test flight in the pattern, lean the engine and it is fine. I would like to make a longer test flight, but I don’t have that much fuel. The only place with avgas in the whole country is Guayaquil, our destination. Augustin charges us gringo fee for the 2 hour work, but we are just happy to have a flyable airplane and pay him cash without usual haggling. He seems a bit surprised. 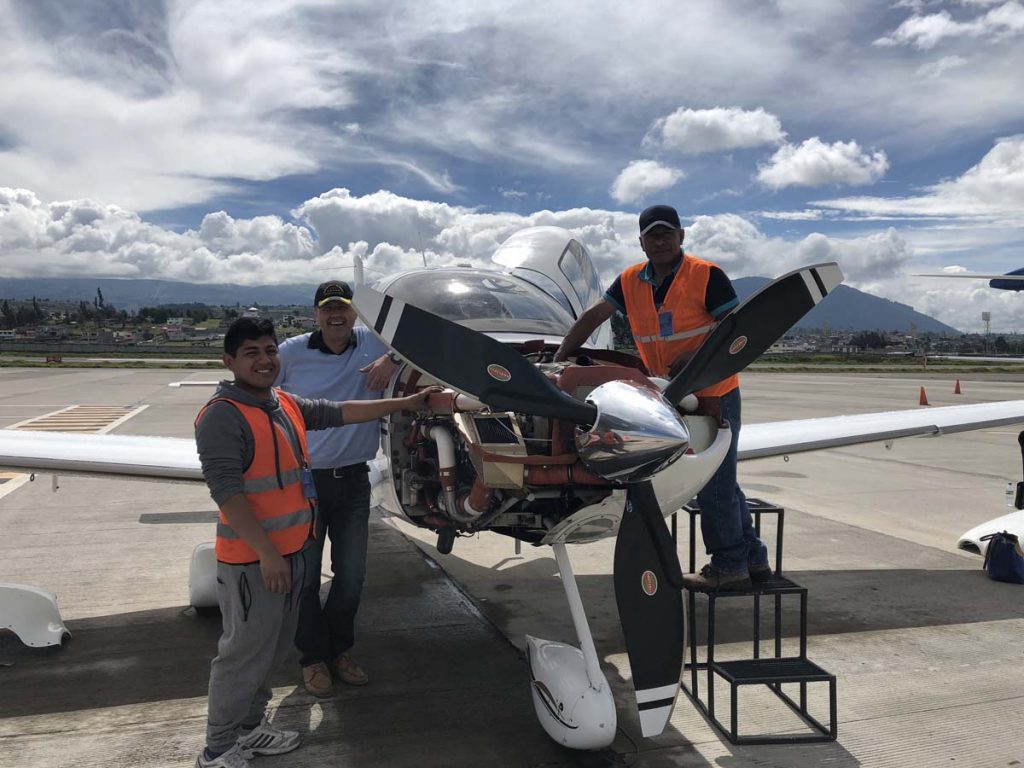 We hop in, open our IFR flight plan to Guayaquil and take off. Leveling at 16,000 we enter IMC, but the temperature is positive so no risk of icing. When I try to lean the mixture, the engine starts shaking violently. Not a pleasant thing in IMC over the mountains with 20K peaks around, so I return full rich. My fuel reserves are dwindling down dangerously, but the fuel totalizer doesn’t know I will be descending from 16,000 feet to sea level. We land in Guayaquil at 4 pm on Tuesday afternoon with 20 gallons. That’s pretty good, we are only 54 hours behind our schedule, but I am exhausted so we stay for the night. Fifty hours to locate the part, bring it to Latacunga, locate a mechanic and replace the part. I am proud of the pilots’ and mechanics’  help network that made it possible and I silently thank everybody who helped me, but in particular Jim and Pete.

We have a dinner at the malecon and walk around a city a bit, the waterfront building are nicely illuminated. 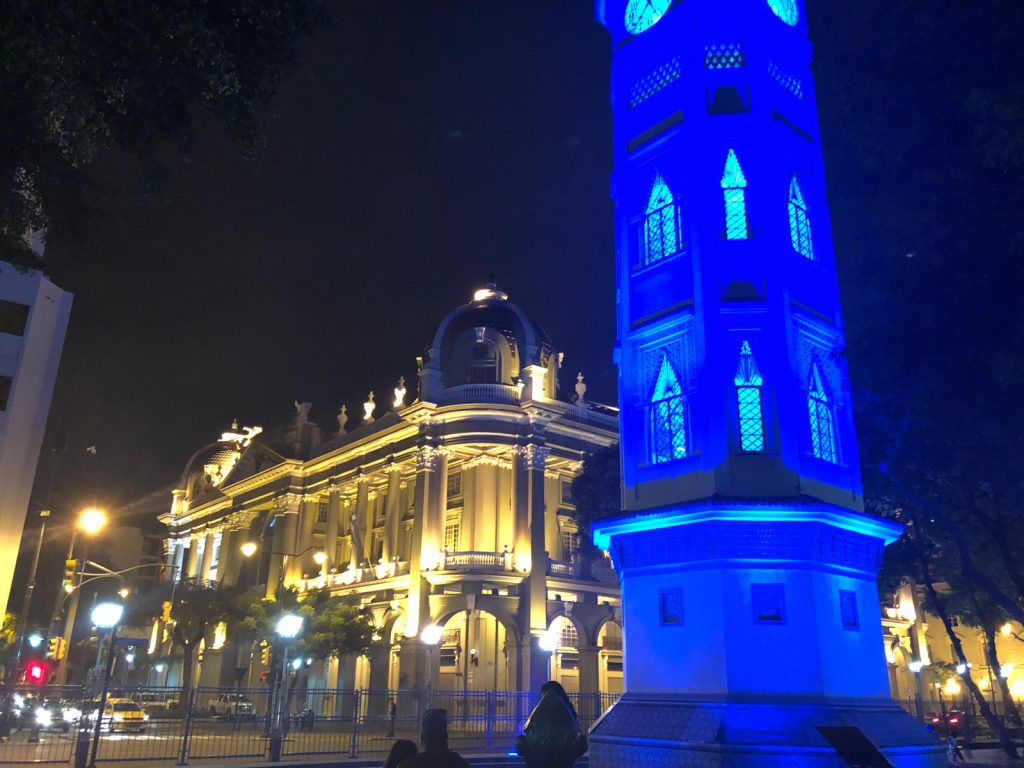 From Ecuador back home