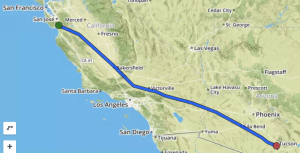 The first part of our trip to South America brought us from San Francisco to Panama City. We left home on a Friday afternoon and flew to Tucson, Arizona. On Saturday early morning we departed for our Mexico AOE in Mazatlan, a pleasant 3:30 VFR flight.

Mazatlan is a very nice and fast stop. We met the same people who welcomed us in 2014, during the first COPA trip I set up and they remembered us. The whole procedure, including fuel, immigration, customs, flight plans and paying landing fees took perhaps half an hour. However, in spite of the fast turnaround we were somewhat concerned that we might arrive after dark to Oaxaca, our overnight stop. Since Mexico does not allow night VFR and the airport sits in a valley with mountains on both sides, we filed and flew IFR. Due to terrain, the MEAs enroute are up to 16,000 so we flew at 17000.

The whole flight was in VMC, except for a thin layer of clouds half an hour before the destination. I suspected that we might get ice if we fly into them, but I saw that we would be skimming tops, so an easy out was to climb up 500 feet back to VMC. As a learning experience, I stayed at our altitude and entered the clouds. Literally within a minute, we had leading edges and wings start to cover with ice. The airspeed dropped by 10 knots and as I was about to initiate the climb, we exited the clouds. Our friend John was flying 10 minutes behind me and he asked how it was. My reply “I got little bit of ice” was, according to him, a big understatement. He also entered the clouds, got all iced up, switched on ice protection, but than descended to 16,000 thinking he would get out through the bottom. Apparently the ice was even worse there, but it ended without any further troubles as he also exited the clouds.

My airplane is turbocharged, but has only basic TKS protection and I would have never entered that cloud if I didn’t see where the tops before. John has FIKI and he wasn’t in any danger neither. I was grateful for the experience, there is not a better learning experience than to see yourself how fast the ice can build up. 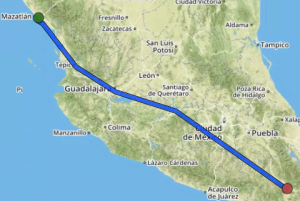 Oaxaca is beautiful town, we didn’t have much time to visit, but we were lucky to be there for the Las Calendas festival. The city is famous for its mole and it didn’t disappoint – make sure you check out the Cathedral restaurant.

As much as Mazatlan is fast, Oaxaca is slow. There is a usual run between offices of the commandante, operations, immigration and customs, with the added twist of the commandante sitting behind a plexiglass window with 5 small holes to talk and single sheet of paper thick slot to pass paperwork back and forth. The operation person wanted to have correct ICAO codes for the airplane, which are so idiotic that most US pilots, including us don’t know them. Usually, I just write whatever they want me to write, the trouble this time was she didn’t know what she wanted.

All together, it took us over an hour, which used to be a norm in Mexico, but many airports are now much more efficient, so that made it slow.

The flight to San Salvador, Ilipango airport was uneventful, but we started to hear unfamiliar ATC facility names. Merida Center, Sandino Approach as we overflew Managua, Nicaragua and finally Salvador Control. We were IFR, because it makes border crossing much easier, but upon arrival to Ilipango, I cancelled and entered on extended left base to runway 33. The approach took us over a beautiful lake, but the runway is in mediocre shape and in spite of textbook landing, I got bad nose shimmy. It couldn’t be bad technique, could it? It must have been bad runway.

John decided to fly the VOR-DME arc approach, which involved several step-down fixes and landed 15 minutes after us. We had a handler, who took care of all the paperwork for us, so it was very efficient, we just gave him our passport and a credit card. There is a restaurant at the local club, but on Sunday it was closed, so we had to continue with granola bar lunch. The airport seems to be frozen in time. 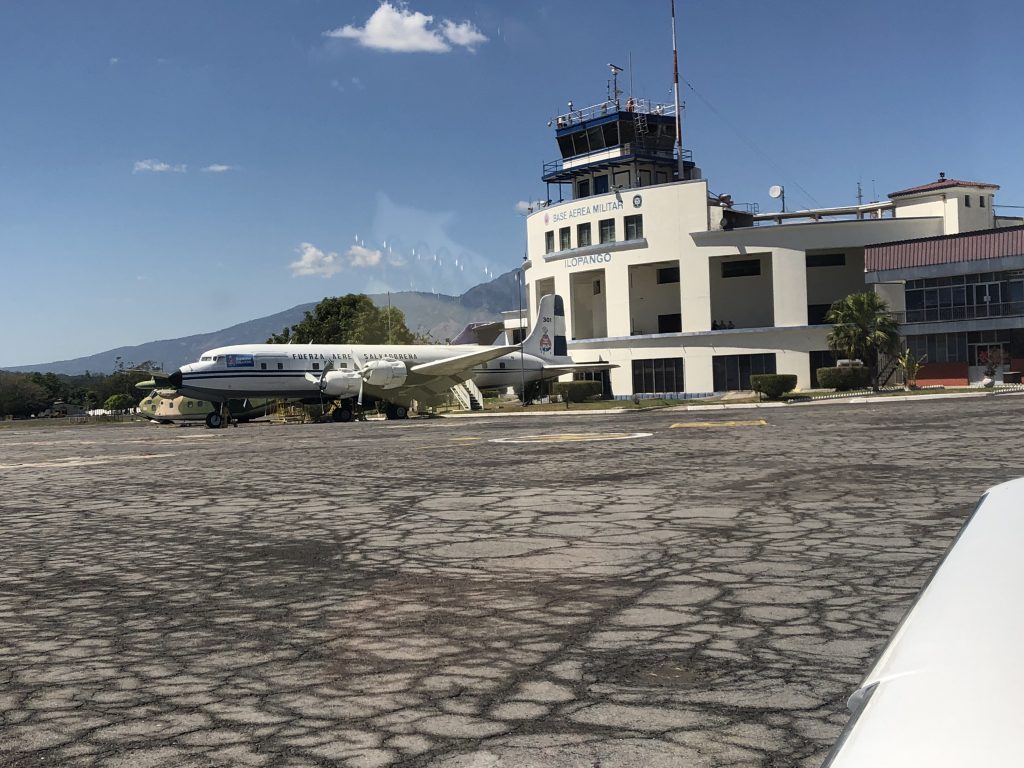 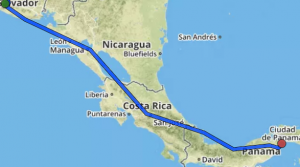 The last leg took us from Ilipango to Gelabert airport in Panama City. Salvador Control handed us to Coco Control, but not before giving us an option of either rerouting, which would add 40 nm, or climbing to 15000 feet. At this point, the fuel totalizer was showing 18 gallons remaining at the destination, which was very close to my hard limit (16 gallons). We had about 25 knots left quartering headwind, so I elected to climb, not wanting to add any more distance, and hoping that the wind would turn counter-clockwise with altitude, as forecasts were saying. Plus, of course, we are more efficient higher up. The wind did turn, after leveling off at 15000, I pulled the power back to 15 gph and the totalizer was now showing 24 gallons at the destination.

We passed San Jose, Costa Rica and close to the border Coco Control gave us two frequencies for Panama Center, saying that one might work. Sure enough, I couldn’t raise anybody on neither of them and I did want to talk to them to ask for a small deviation, because our current routing would have taken us 25 nm from the shore. I found the third frequency for Panama Center, who approved our reroute. However, we had to switch frequencies for Panama Center ourselves, because the reception was spotty. Finally we got to Panama Approach and there it became standard US phraseology with American accent and efficient handling. Gelabert is a VFR-only airport and we got a visual approach over the entrance to Panama Canal. Overflying a small hill on short approach, we landed after 4:15 min with 22 gallons of fuel remaining.

The local FBO (Mapiex) was fast and efficient in handling all our paperwork. We don’t use handlers in Mexico, but south of there they become first convenient (Guatemala), than necessary (Salvador) and finally mandatory (Costa Rica).

The next day, I went back to check on that nose shimmy. Cirrus specs are 35 lbs for the nose wheel tension when pushing on the axle, we had nothing. Nose wheel was basically freely castoring. The cotter pin securing a castle nut used to adjust the tension was broken and if we didn’t check it, we could have had nose gear collapse.

Our next legs will bring us to Cartagena, than to Bogota, Popayan and Cali in Colombia.