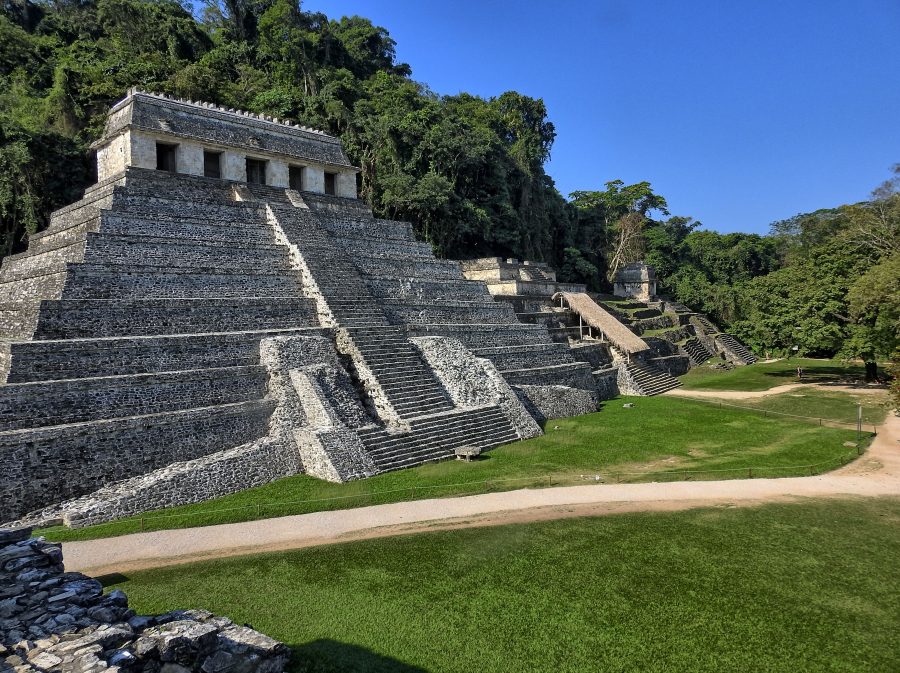 I’ve been organizing COPA trips to Mexico for a while now, and this was our 6th. We had 11 airplanes and 24 participants flying to Oaxaca, San Cristobal de las Casas and Palenque, you should check out the itinerary.

It didn’t start well. We were planning to leave on Friday afternoon, but when I checked on the airplane on Thursday, battery #1 was dead. Given that’s the one that powers the starter, it didn’t seem wise to fly. Searches of nearby shops came empty, so I looked online. and found an outfit in Texas, that was shipping overnight for $280. A bargain. Battery came in at 2 pm on Friday. I run to the hangar, installed it, checked voltage and all look good. As I was closing the hangar, I realized I didn’t have my cap. Open the door and look everywhere, I couldn’t find it. There was only one place it could have been. I opened the cowl and sure enough, my cap was on the intercooler.

This is another example how important it is to walk around the airplane before starting the engine and examine engine compartment for foreign objects before closing the cowl. Particularly if in hurry or stressed.

We left before 4 pm for Phoenix.  I was watching weather all the week and it didn’t look good. However, skew-T diagrams along the route were showing that tops where below 17,000 with freezing levels around 3,000. It was unstable environment with some convection activities building up. I decided we should be able to climb on top with TKS on and indeed, the wings got trace ice before we climbed on top. 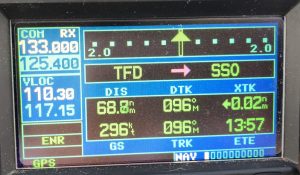 Next day, we flew to McAllen, TX, to meet about half of the group. Mighty tailwinds made it possible to make that flight without a stop, but we wanted to stretch our legs, perhaps also grab a bite and decided to land in Fort Stockton. Coming in on short final I saw barriers on the runway, at about one third.  I added power to go over, but the rest of the runway looked fine, so we landed. It turns out there was indeed a NOTAM for runway resurfacing, luckily only the first third of it. Lesson learned: RYFN (Read Your Freaking Notams). Airport was deserted, so we took gas and a granola bar and left.

There isn’t much to say about McAllen, other than it is a convenient launch point for Mexico and allowed us a direct flight to Oaxaca, our first destination. On the way, we could admire Citlaltépetl volcano, the highest peak in Mexico.

To say that Oaxaca is a slow AOE (Airport of Entry) would be polite. First, they directed us to custom and immigration, which was reasonable, but then we got to the operation office where they told that we should have first closed our flight plan so that immigration and customs can apply required stamps. Than they proceeded to laboriously fill in seven Multi-Entry Authorizations, each of 8 pages. It took about 2.5 hours and we left disgusted without authorizations, which they promised to have ready for the next day. 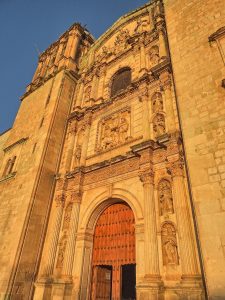 The city itself is however wonderful. First, the food, this is a culinary capital of Mexico and if you ever visit, make sure to stop for mole at El Catedral and for tacos de lechón at Pitiona. Then, the city itself with its 16th century Church of Santo Domingo, the central Zócalo square, Palacio de Gobierno, with coloful murals depicting regional history. We wondered to Mercado 20 de Noviembre and couldn’t resist to stop at Chocolate Mayordomo, a museum and a tasting room with classes where you can learn to make your own chocolate drinks.

Monte Albán was founded in 500 BC on the top of a mountain dominating Oaxaca and functioned as the capital of Zapotecas from the beginning of our era until 800 AD. At its time of greatest development, Monte Albán had about 35,000 inhabitants, who lived mostly on the terraced slopes of the mountain devoted to agriculture.

It was a short one hour flight from Oaxaca to Tuxtla Gutierrez, where we boarded a bus for a half an hour drive to Chiapa de Corzo, lunch and a boat ride in the spectacular Cañon del Sumidero. The canyon’s creation began around the same time as the Grand Canyon, by a crack in the area’s crust and subsequent erosion by the Grijalva River, which still runs through it. Sumidero Canyon has vertical walls which reach as high as 1,000 metres (3,300 ft), with the river turning up to 90 degrees during the 13-kilometre (8.1 mi) length of the narrow passage. 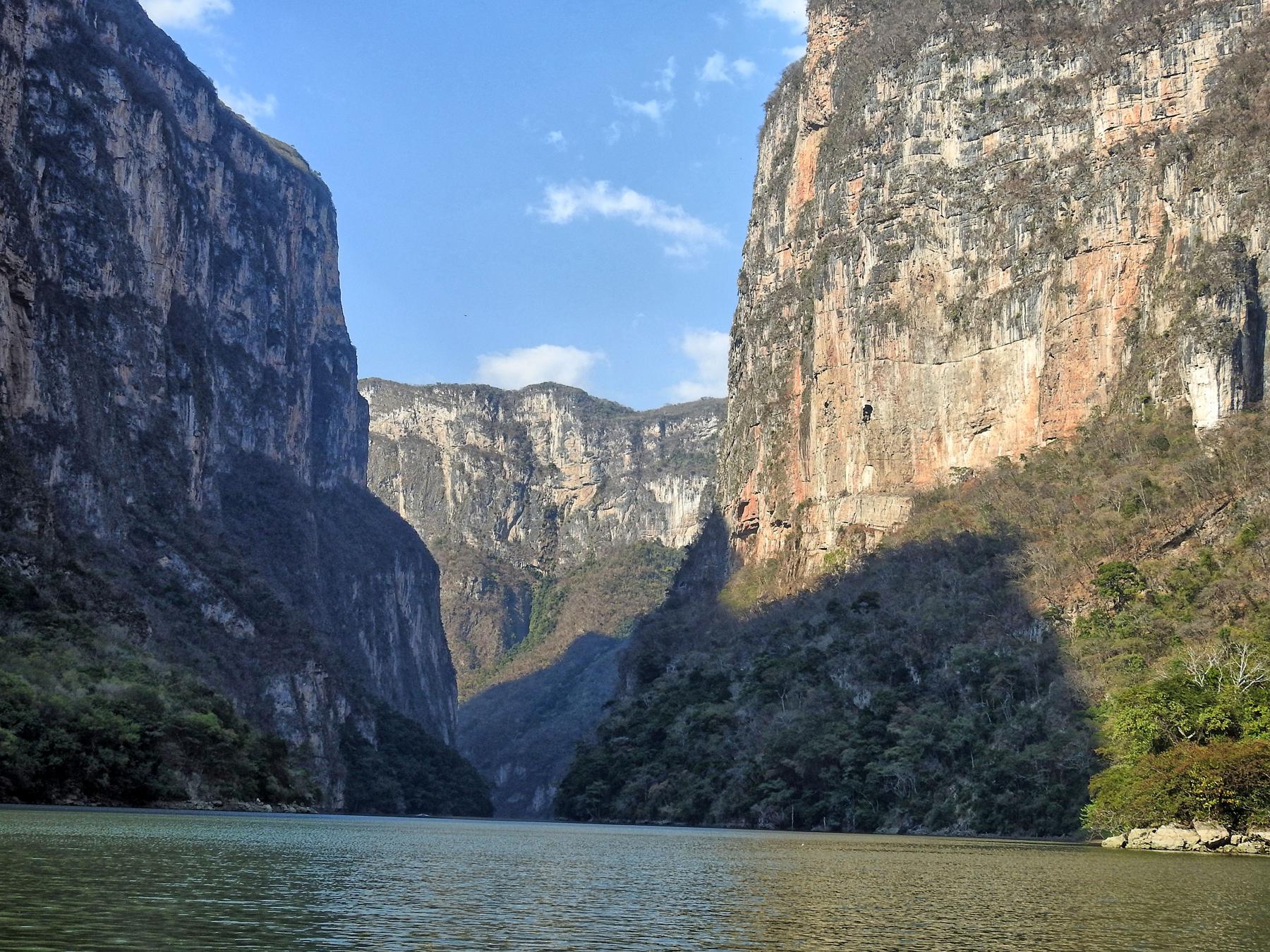 San Cristobal de las Casas was the capital of the state Chiapas until 1892, and is still considered the state cultural capital. The city’s center maintains its Spanish colonial layout and much of its architecture, with red tile roofs, cobblestone streets and wrought iron balconies often with flowers. We checked into Hotel Casavieja, a very simple but adequate place very close to the center and went out for dinner. 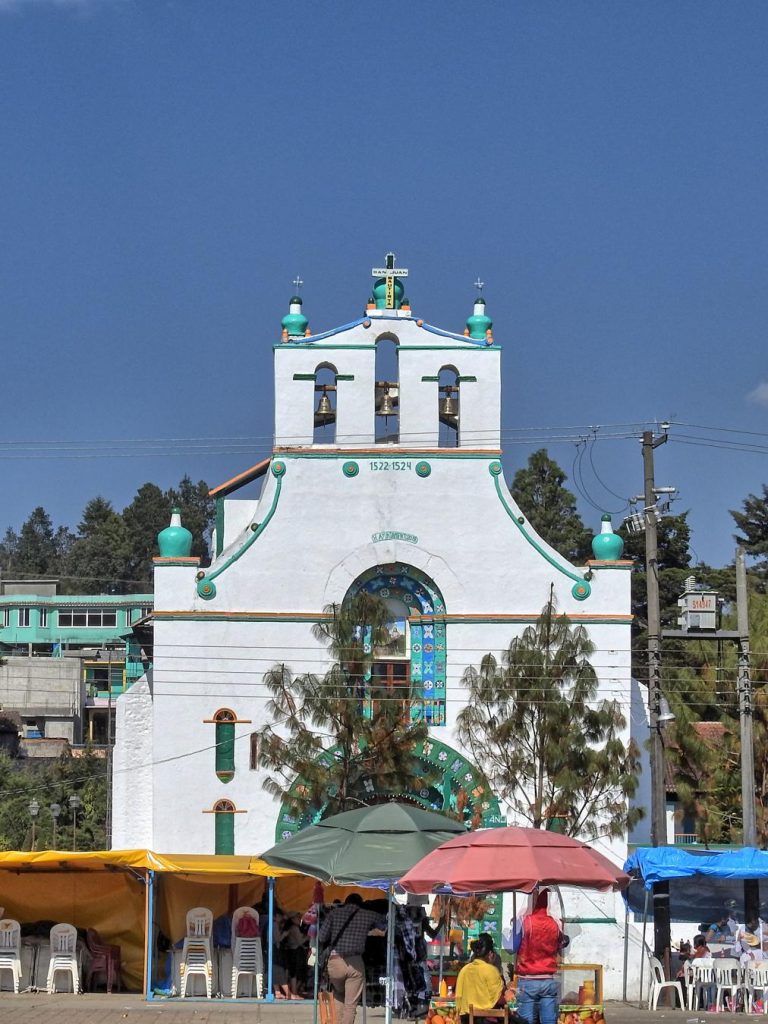 The most interesting and intriguing place to visit is actually 6 miles outside of the city, the Tzotil town of San Juan Chamula and its Iglesia de San Juan Bautista. The church is filled with colorful candles, and smoke from burning copal resin incense, commonly used throughout southern Mexico. Along the walls of the church are Catholic saints resting on tables posted in the church, but they represent Mayan gods. Candles are lit and the people sit on the floor and pray below the saints. The local form of Catholicism is a blend of pre-conquest Maya customs, Spanish Catholic traditions, and subsequent innovations.

It is forbidden to take pictures inside the church, so you will have to come and see yourself.

It was even a shorter flight from Tuxtla to Palenque, but it turned out that the destination was overcast and unlikely to clear up. We didn’t want to file IFR and suffer through 16,000 feet MEAs, so we launched VFR planning to request a pop clearance at the destination. The overcast layer was only few thousand feet and we cruised in VMC on top. Arriving over Palenque we dutifully request IFR clearance for the VOR/DME Rwy 10, but a relaxed controller replied simply: “roger, report turning inbound”. I think this was the first time I flew an IFR approach in actual conditions on 1200 squawk code, but come to think about it, what’s the point of having a discrete squawk code if there is no radar? 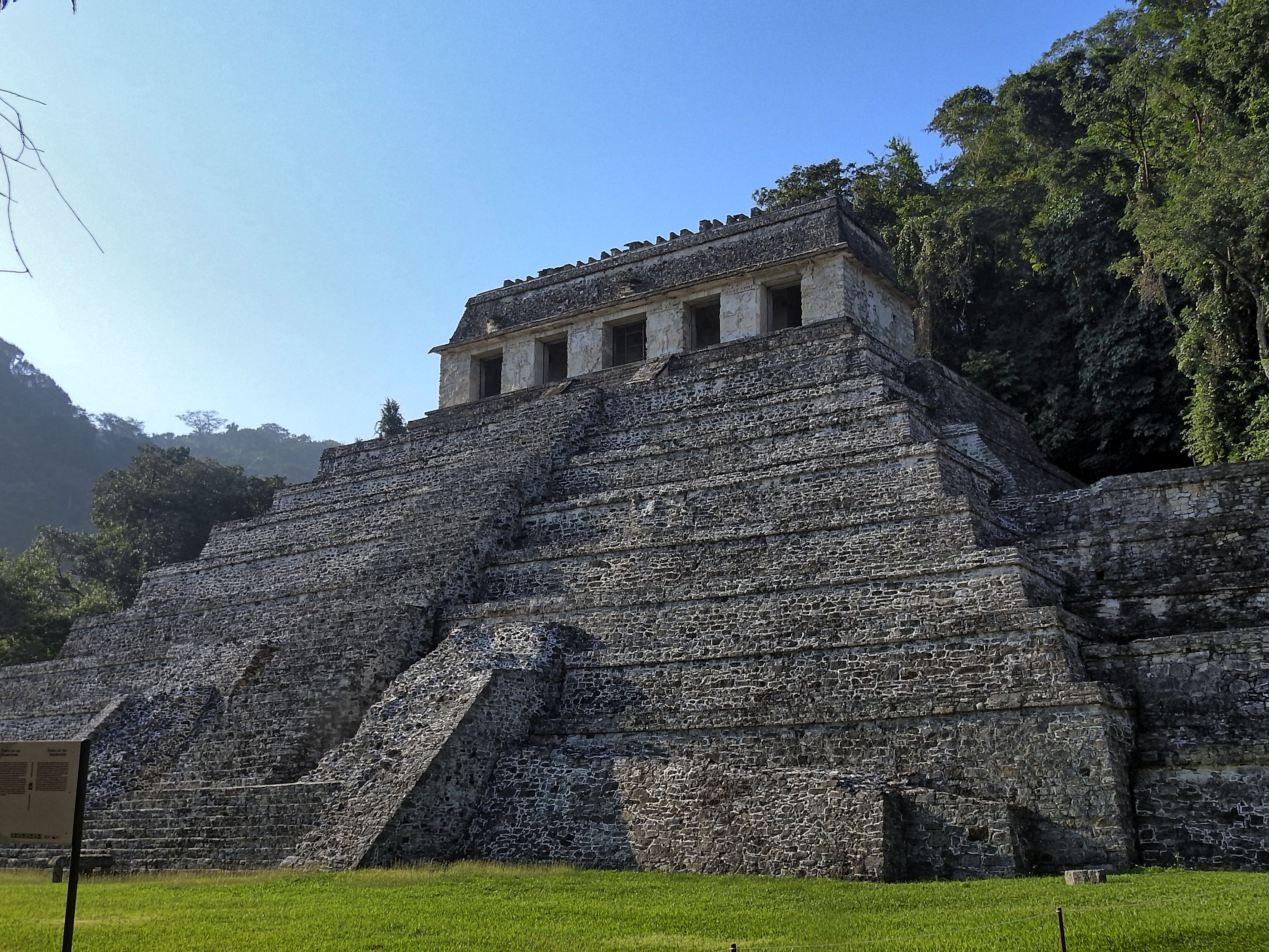 We checked into our hotel Piedra de Agua and the next launched for a visit of the Palenque archaeological site. The city was founded during the late pre-classic, which corresponds to the beginning of the Christian era. After several centuries, about 500 A.D., the city rose to be a powerful capital within a regional political unit. The total area of the archaeological site is about 1800 hectares and 1,400 buildings have been recorded, of which only about 10% have been explored. Older than the ensemble at Tikal, whose major monuments were constructed a hundred years later, the group of ceremonial buildings at Palenque is an outstanding example of a ceremonial and civic site corresponding to the middle of the Classic period in the Maya area. 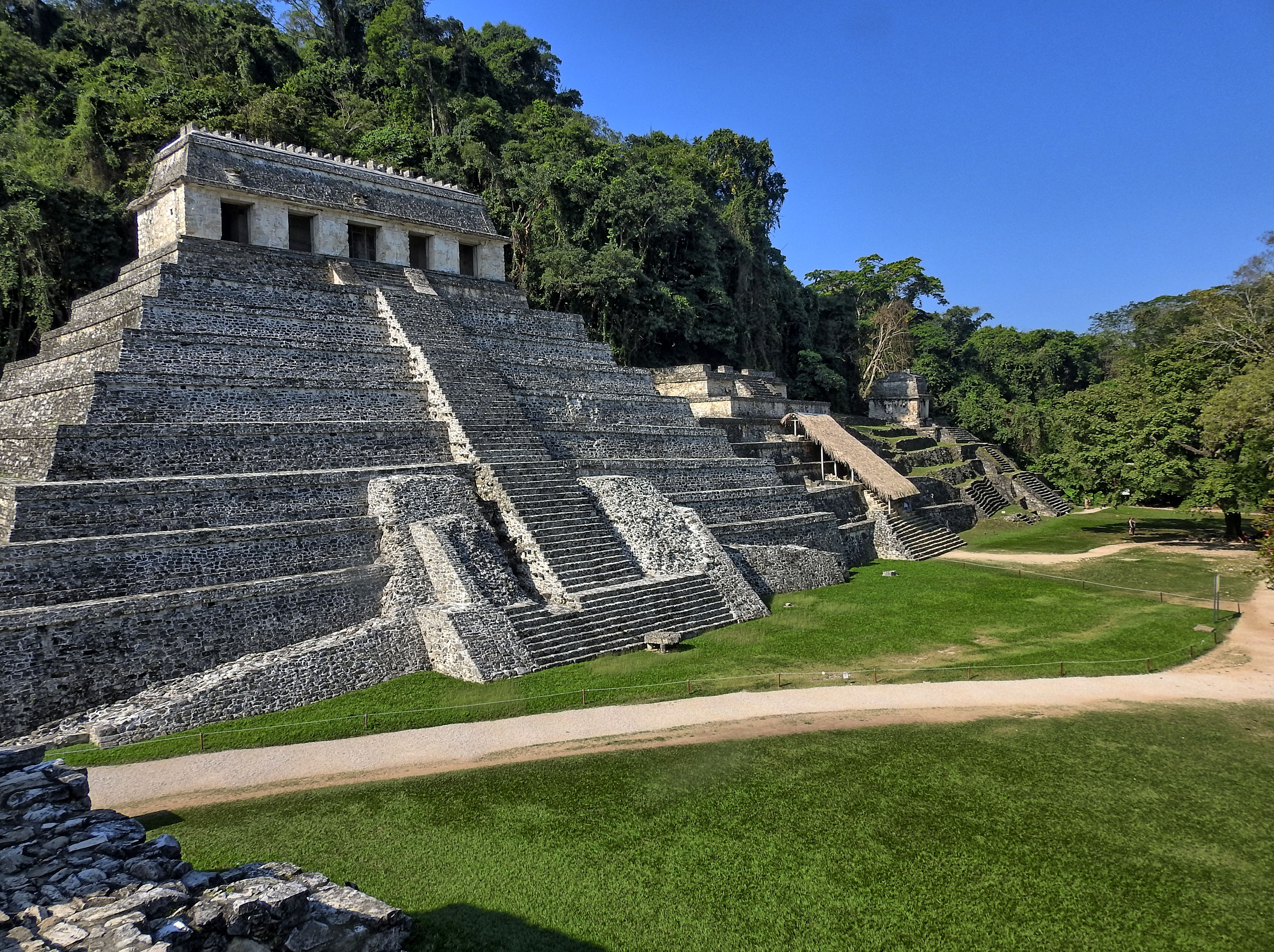 It takes about half a day to visit a day to visit the site and in the afternoon we drove to see and take a dip in Agua Azul waterfalls. These waterfalls consists of many cataracts following one after another, taken from near the top of the sequence of cascades. The larger cataracts may be as high as 6 meters (20 feet) or so. During much of the distance the water descends in two streams, with small islands in the middle. The water has a high content of calcium carbonate and other minerals, and where it falls on rocks or fallen trees, it encases them in a thick shell-like coating of limestone and gives them unique color. 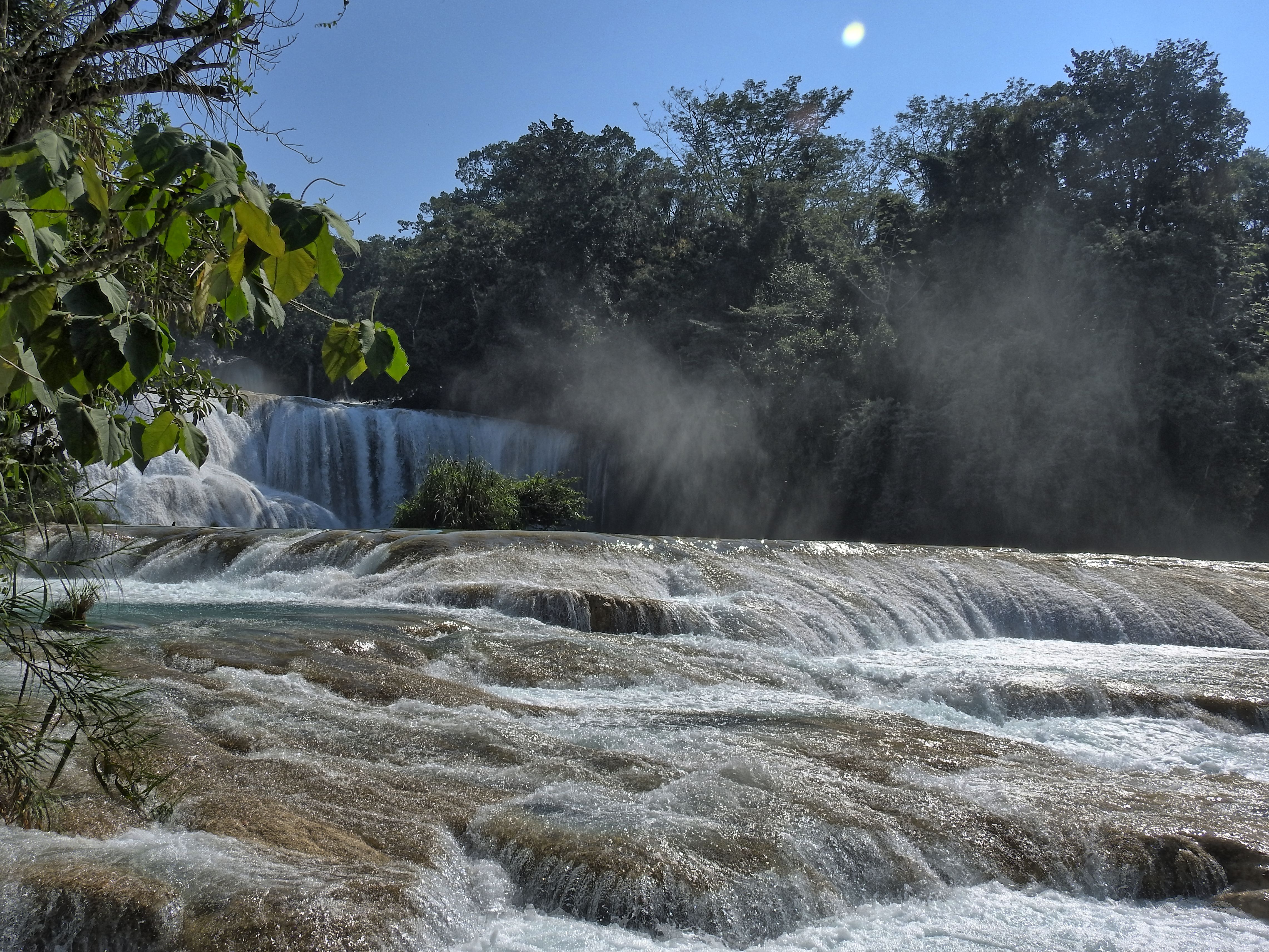 It was refreshing to take a swim in one of the natural pools. On the way back, we stopped to admire yet another waterfall, Cascada de Misol-Ha. 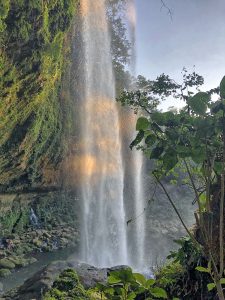 It is 2,000 miles from Palenque to San Carlos, our home base, so we decided to stop on Saturday night at Hacienda de los Santos, our preferred hotel in Mexico. The flight took us first to Queretaro for refueling and we then battled strong headwinds on the way to Alamos (MM45). All was however forgotten with the first sip of margarita! 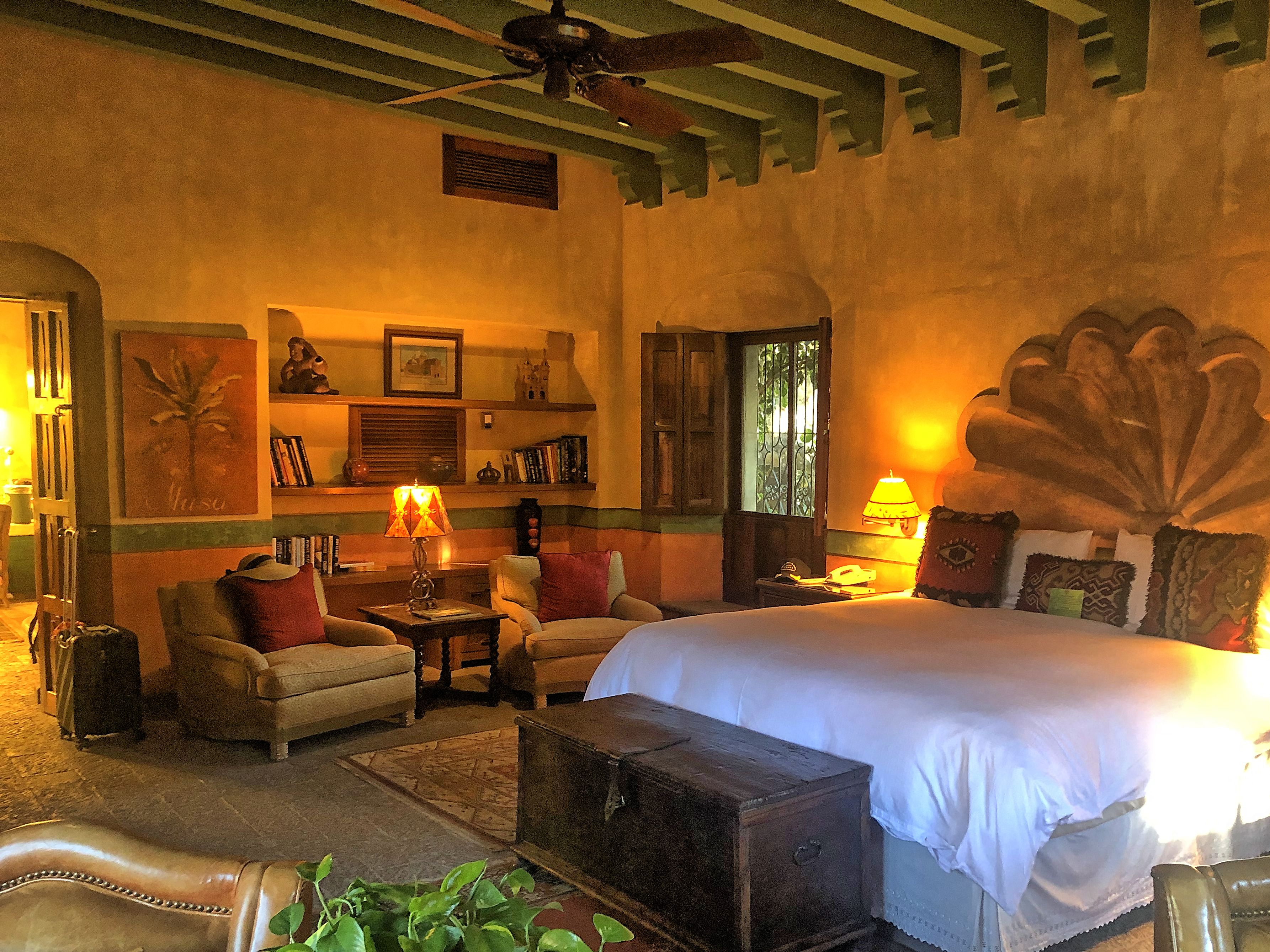